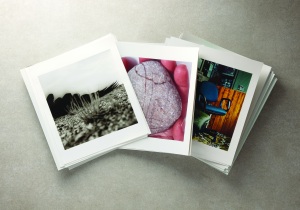 Simryn Gill’s practice is often rooted around the representation of moments of the everyday. Whether it is images of dark and foreboding home interiors or images that detail the absurd, where large tropical fruits are placed on the head of unsuspecting subjects, Gill actively seeks to convey the multiple layers of engagement that we have with the world – our engagement with the interior and the exterior, the private and the public. This exhibition held at CCP chronologically detailed seven major photographic series that form an integral part of Gill’s artistic practice.

A line of large-scale black and white prints from Gill’s Forest 1996-1999 series flanked the wall in first space of CCP. An exploration into the personal landscapes that inform Gill’s practice, here we witness images of groves of rubber trees and close ups of tree trunks where languid strands of text that are juxtaposed over the plants appear literally to jump off of the print. The strands of text taken from Frankenstein, monographs and Darwin’s The Origin of Species appear to take on a life of their own, embedding themselves into the plants like veins of a leaf, like rubber sap seeping out during harvest time and like shells scattered across a beach. This is open invitation for the viewer to look closely at the works – peering into an otherworld where the text disintegrates and literally becomes part of its surroundings – a visual allegory for Gill’s own personal history of immigration and subsequent displacement.

On the opposite wall, a solitary image from the series A small town at the turn of the century 1999-2000 sits quietly, providing the viewer with a visual timeline of Gill’s oeuvre. Here her initial exploration into the filmic qualities of the photographic image and the physical form of plants is transformed into an evocation of place. In this work the human figure – anonymous and motionless – is framed in the centre of the image and appears to take the form of a plant as a headdress of bananas obscures any visible sense of self. The image is at once vibrant in colour and absurd, with the fruit headdress acting as a visual reference to the essentialist notion of an exotic ‘other’, historically espoused by the West when representing difference.

In the main space, eighty prints from the series Dalam 2001 which in Malay translates to ‘deep’ or ‘underneath the surface’, filled two entire walls. Gill knocked on the doors of unsuspecting strangers across the Malaysian peninsula, asking if she could photograph their living rooms. The resulting images are expansive yet still, saturated in vivid colour that belies the lack of the human form. What becomes evident is that these photographs are explorations of a collective interior, prompting the viewer to interrogate their own personal spaces – their cultural, social and physical spaces. From the dilapidated to the decidedly bourgeois, from bare concrete floors to cream tiles, these images are ultimately interior enquiries and excursions into the cultural and socio-economic mix of a country. There are no traces of inhabitants in these spaces except the objects, furniture and ephemera that form part of the subject’s constructed identities.

Continuing this exploration of the world around her, in the final space the recent photographic survey of regional New South Wales and South Australia Inland 2009, presents an utterly honest account of a multilayered Australia. Here, classically framed photographs of the horizon and landscapes intermingle with images of home interiors and images of pebbles and stones that Gill collected on her journey. Visually, the home interior photographs share a thematic link to Dalam due to their subject matter and lack of people, however the scale is not as expansive and therefore feels less clinical. It is as if Gill stumbled upon a moment, documenting everyday life caught in stasis. There is also an overt materiality to how this series is presented, with images unframed and unmounted placed loosely on a table. By choosing this form of installation for Inland, curator Naomi Cass suggests that it encourages the viewer to hold the photographs allowing them to sort and arrange the three perspectives – inside, outside and ‘in hand’ – creating alternative relationships with the work.[1] This engagement literally immerses us into the world that Gill seeks to present, breaking down the barrier between spectator and artwork and merging the narratives embedded into the images with our own personal histories.

There are curatorial decisions that provide the exhibition with a thematic flow and conceptual consistency giving the viewer a sense of space and moments to comprehend. Juxtapositions such as Forest and A small town at the turn of the century for example, exhibit a considered curatorial hand. No doubt this in part due to Gill’s process driven nature of her photographic practice and objective approach to documenting and exploring her own personal history, however Cass has also provided a space for the viewer to ponder and be enveloped by Gill’s interrogations of the world around her. It is a world where images of mechanical power plants intermingle with quiet black and white images of bedrooms in Power station 2004, where personal narratives are intertwined with images of the Australian exterior in Inland. Effectively this exhibition is inherently about place – an ode to place that is at once profound and compelling.

[1] Naomi Cass, How we are in the world: The photography of Simryn Gill, exhibition catalogue (Melbourne: Centre for Contemporary Photography 2009), p. 6 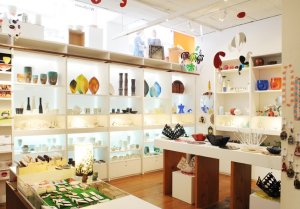 As I walk past Cumulus Inc and descend down the stairs into Craft Victoria’s gift store, I am struck by the incredibly diverse retail and food options that Melbourne’s CBD has to offer. Inside this gift store that adjoins Craft Vic’s gallery space, you’ll find a thoroughly curated selection of craft objects, handmade accessories and homewares. The store is currently featuring new objects from Lightly Ecoware range and Kate Jame’s horse hair necklaces.

Just the prefect spot to find something special for that special someone, Craft Vic’s gift store is like that comfortable sweater that you always return to as winter sets in. It is a gift store that you can always depend on to find something that brightens up the barren shelf in your house, a gift store where you’ll discover uncanny and beautiful objects that exhibit incredible handmade detail. An institution that showcases and promotes the vibrant craft and design culture of Melbourne – the city must be a better place for it. 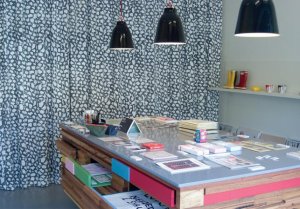 A veritable treasure trove of delightful products, Third Drawer Down has been in its George St location for a number of years now. Just off the beaten track of Gertrude St and next door to Lamington Drive, the space is bright and airy and is dominated by an intricately designed central display unit. Inside its drawers you’ll find their famous high thread-count linens, fabric swatches, pillowcases and tea towels that feature designs from renowned artists such as Louise Bourgeois, Kat Macleod and David Bromley.

Not purely an ode to illustration and print design, Third Drawer Down also stocks wonderfully eccentric socks by ashidashi, the interview based magazine Mono Kultur and a dizzying array of stationary by Kaweko. Frame this all with delightful service which is knowledgeable yet exhibits restraint and you get an exceptional select shop that Melbourne desperately needs on its retail landscape.

Creatively, I am currently working on a short story which is about the rediscovery of place and the relationship between a boy and his grandmother.